I frequently get these sprocket marks (see the top and bottom of the frame). I am using the new negative supply pro 35 film holder, and I also used to get the same with their basic 35 holder. It’s frustrating because I end up needing to crop out quite a bit from some shots. 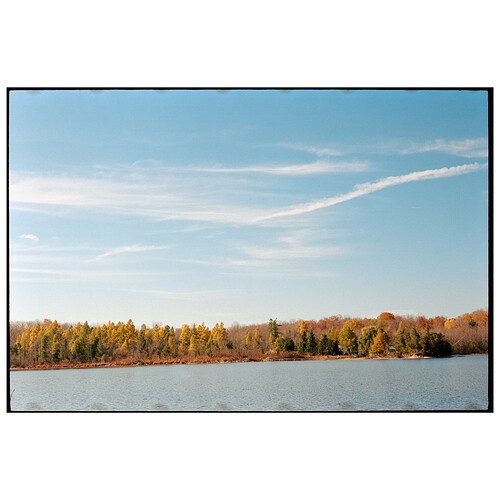 Important notes about my setup:

I am wondering if it’s something I’m doing wrong, if it’s common, and if it’s easy to fix. My guess is that it’s some small amount of stray light leaking through the sprocket holes, but I am surprised I don’t see this talked about much if it’s fairly common.

Have you experienced this as well? Any tips would be appreciated. Any questions let me know.

Hey there – Welcome to the NLP Forum!

I’m using the same negative holder as you do and never had any of these marks. Could you share further details on your setup, e.g. which light you’re using, MK2 holder (yes/no), camera/lens… everything that helps understanding your setup better.

Thanks for your reply.

The mount is the basic adapter for the new pro film carrier.

I have the full frame mask inserted into the carrier to block stray light.

Here is a photo of the setup: 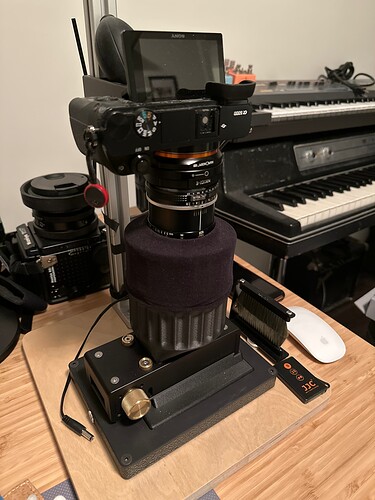 This looks like the almost perfect 35mm set up, which should not leak any light.

Are you using the mask inserts for the 35 holder (FF, half frame, pano)? To my understanding that’s the only way light could pass the sprockets, as it leaves a 1mm gap between the bottom plate and negative if not inserted.

Surpringsly enough you report these marks were also visible with the Basic carrier, which does not have any masks (to my knowledge).

Would you mind sharing a raw file or a screenshot of the full upper part of the negative pre-conversion to see how big the impact is of the sprocket holes?

I am using the appropriate mask inserts (FF in this case). Here is a screenshot of the raw negative file. Definitely not as pronounced. Note that the micro lens doesn’t cover 1:1 and so it has quite a bit of black around the edges.

(Sorry it is upside down.) 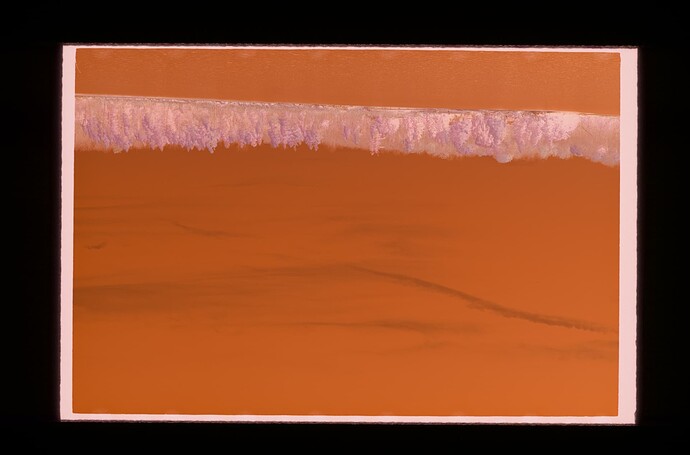 Actually, as I investigate closer, I just took a photo of the negative with my iphone, and I think the marks are directly on the negative. It’s very faint, but it’s there (see below). 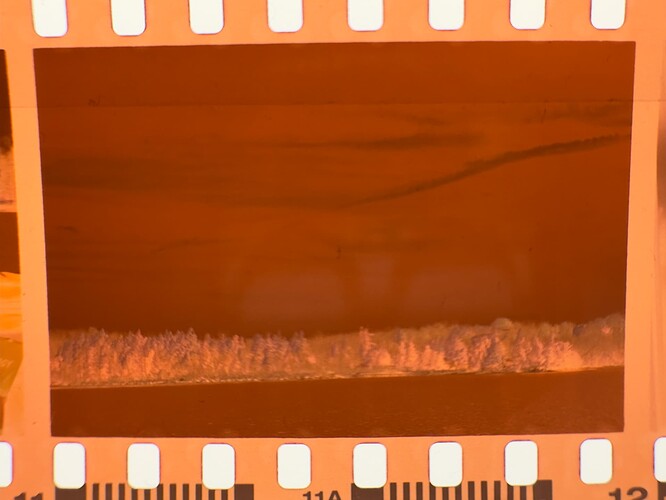 Now I have a whole other thing to look into I suppose.

Note: the original image was captures with a leica m6 classic and 50mm summarit.

I think I know what it is – Looks like pressure marks from the advancer wheel of your M6. This happens when the film and advancer are slightly misaligned. When loading the film, make sure to push it all the way into the camera. Cog the camera once to ensure the film advances correctly before closing the back door. Then cog to frame 1.

Very interesting! Yes that could definitely be it. I tend to put the film in and then I don’t advance until I close the bottom (usually gets me an extra shot or two).

I definitely notice some extra tension when rewinding sometimes as well, but not every time, which kind of aligns with your thinking. I’ll be more careful on the next few rolls and we’ll see how it goes.

Thanks for being so helpful in diagnosing here, Chris.

It could be mechanical damage from the take up spool on your M6 but wouldn’t that show up as physical indentations on the film? On the other hand I’ve never seen anything like it. If it had been B&W it looks a bit like very, very mild ‘bromide drag’, i.e. a processing fault exacerbated by the sprocket holes and, I think, insufficient agitation or stale chemistry, but I can’t see how that could happen with the standard machine C41 colour development process.

Hmm yeah I don’t see any indentations or real physical indications on the negative. I can try to find some more pronounced examples.

I generally only see it on a few frames per roll, but it’s especially noticeable with open skies.

Here is another example with BW film: 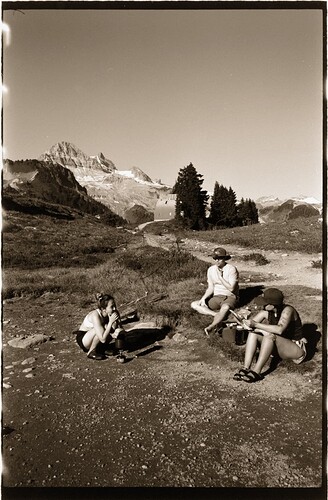 (…new account so I can only upload one photo per reply. see next reply for the negative)

This one is kind of strange - the first 8 frames or so have the “bromide drag” look (and some actual light leak), and then the effect gradually lessens with each shot. 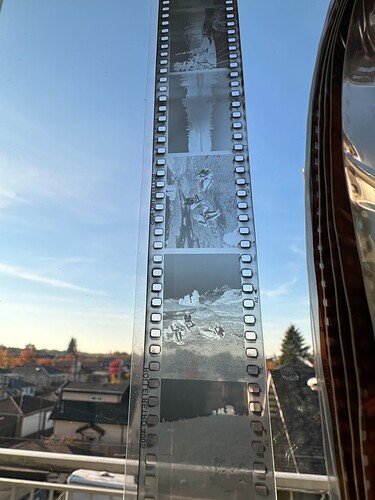 I’m not sure if this is actually the same issue though, since it is so visible and especially in the beginning of the roll.

Looking at three rolls side by side, they all share the same “light leak” pattern on the edges, but only on the first 6-8 frames. None of them have any leaking issues past that point. 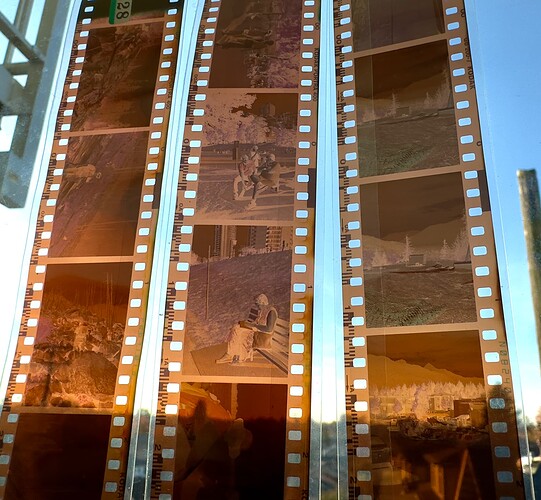 This is really a weird issue… How do you develop your film? It somewhat must be related to that process. A broken/misaligned machine/spool? Given the fact it only appears on the first 6-8 frames of any given roll, this is a reproducable issue. (and I trust you don’t mess up loading your M6 on every single roll you shoot

If you have your film developed in a lab, I would ask them about these marks and to eliminate the camera out of the equation, get the next films developed in another lab?

Yeah I get it developed at a lab. I’ll bring my next roll somewhere else and I will also ask my lab about the issue.

I also just checked and I have the exact same issue with film developed from my Nikon F2. So it must be something in the dev process like you said.

Well! Thank you all for helping me debug this one.

Seems that it’s not your scanning setup anyway. A light leak from/around the sprocket holes would look pale on the final inverted image though wouldn’t it and those faint marks are dark? Not that a light leak is a good thing, do you think that you might have left the films lying around out of their canister? I think they are different issues so I’m thinking processing as well.

do you think that you might have left the films lying around out of their canister?

It’s likely that they sat on a shelf outside of their canister for a week or two before developing. Maybe that’s enough to cause the issue?

I think that’s probably solved the light leak mystery, there’s going to be a tendency to let the light in at the edge of the film where the felt strips adjust to accommodate the film. Certainly I’ve always been very careful when dealing with films outside of their canisters.