I’ve been reading along on RGB vs. High-CRI light sources to scan negatives and am still a bit puzzled if having a good RGB light would be more beneficial than CRI95 or CRI99.

Would you mind to shed some light into the current situation and let me know if it’s worth building a RGB light at all? Highend commercial products, such as the Phase One Capture Table or DT Photon both rely on High-CRI light sources, while lab scanners (e.g. Fuji Frontier SP-3000) use RGB light. The main difference is surely that Phase One and DT both use digital camera backs while the Frontier operates through means of trichromatic film scanning.

I found RGB LEDs which operate in the spectrum of the Fuji Frontier, so …… is it worth it?

Happy to have your opinions!

Quite a few posts deal with the topic already. I’ve not seen the definitive answer to that question though. You might like to read through this thread:

Optimize NLP for High CRI AND RGB light sources? Reading the NLP forum it looks like there is an active debate about High CRI vs. RGB light sources. I think that I understand the source of the disagreement and see an opportunity for NLP to be much better. I have scanned about 1/3 of a lifetime collection of 30,000 color negatives using a Sony NEX-7 and NLP. This was intended to be just an index of the collection. The best images were to be rescanned with a Nikon Coolscan LS4000 ED. The Nik…

Tip: Recent iPhones and iPads create a white screen from pretty narrow band R, G, and B cells, it’s an easy way to try out RGB backlight. Take a look with a magnifying glass.

Hey – Thanks for the feedback!

I’ve read the thread before posting and it also didn’t give me a definitive answer. I’ve also seen the tests you made @Richard1Karash (quite impressive).

I guess a lot depends on the inner workings of NLP and how it deals with camera RAW data and if RGB light sources would be specifically supported going forward. That’s something only @nate really could answer.

There are quite a lot of projects for RGB LED replacements for enlargers and also commercially available products (though quite expensive) from Heiland Electronic: https://heilandelectronic.de/led_kaltlicht/lang:en

Next to the fact that I love to satisfy my own curiosity, maybe we’d have something at hand to build an affordable commercial product, meeting the specific needs of analogue enthusiasts?

Seriously, give it a try with a current iPhone or iPad to see if you like the results.

Went ahead and scanned two of my last negatives with both 99CRI and RGB light sources (the latter done with a recent iPad Pro). Same settings for scanning, white-balance set as needed. NLP settings identical (except WB).

Some thoughts on the photos:

Not sure I can draw massive conclusions from just two negatives, but it’s worth exploring more into RGB light sources and feed the nerd in me. 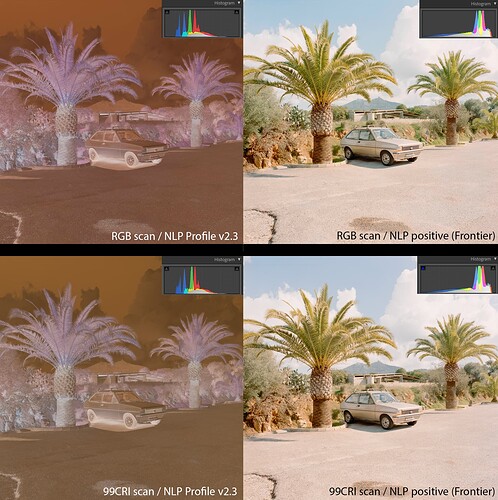 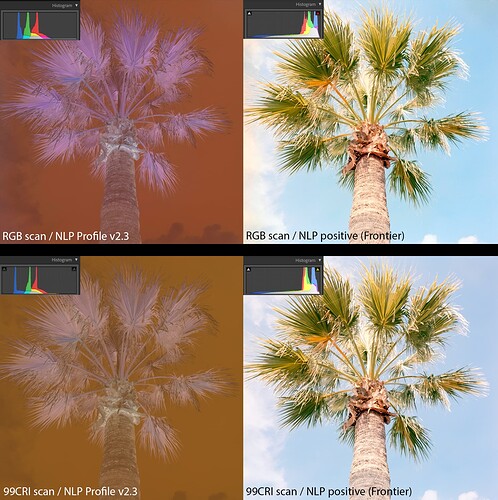 Please ignore the yellow cast on the left side of the Palm Tree RGB scan. Human error with the negative holder.

I repeated an old test, this time with 2.3, posted on the NLP Facebook group.

Red is also something that I found is affected. Overall it doesn’t seem to make much difference for camera scanning and NLP 2.3 if a high CRI or RGB light is used, except for the reds.

Though I’m a bit surprised this is the case, as presumably the wavelength for reds should be broader with high CRI lights vs. the narrow band with RGB light sources.

Could this be related to something inside NLP?

In a very unscientific approach to see differences I’ve taken existing photos (scanned with a Fuji Frontier), inverted the RGB curves and re-processed these through NLP as TIFFs. The expected output (to me) would be to see the (almost) same image as before. Everything looked right, except the reds.

Here is Flash vs iPhone. More on the Facebook page. 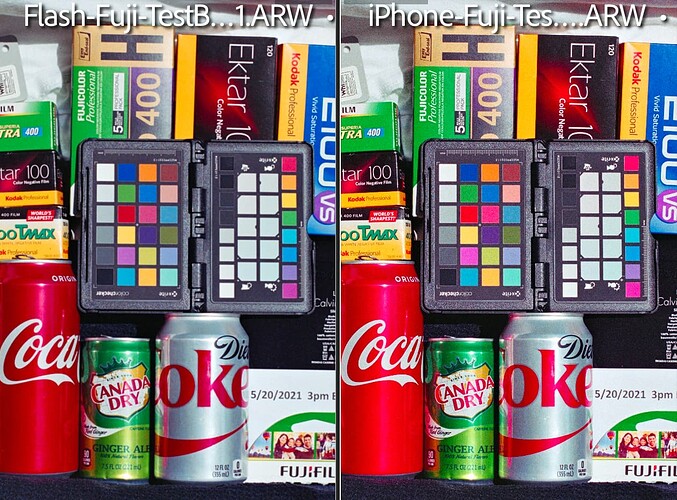 Would this be the Negative Lab Pro Facebook page? I don’t really ‘do’ Facebook but in a moment of weakness I did apply to join that private group but never received a reply. I just wanted to ask if you profile these shots using the Colorchecker and if so how that affects the colours, have these two been profiled in fact?

I’m in the same boat here – Not a big FB fan, but did apply for the group too. Still waiting for feedback. Would prefer to keep the discussion in this forum though.

Phooey, sorry to hear issues in getting to the FB page. To ensure no confusion, I’m talking about this group:

No, I have not attempted a profile based on the color checker, and the shown test results are not from custom-profiled images, just the standard NLP and LR profiles applied.

In case it helps anyone, I went to have another go at applying for access to the NLP Facebook group and found that I had access, so my problem was just that for some reason I didn’t receive the notification. I suppose that if I was a regular FB user I would have discovered this sooner but really I never go on.

Looking forward to having a look round.