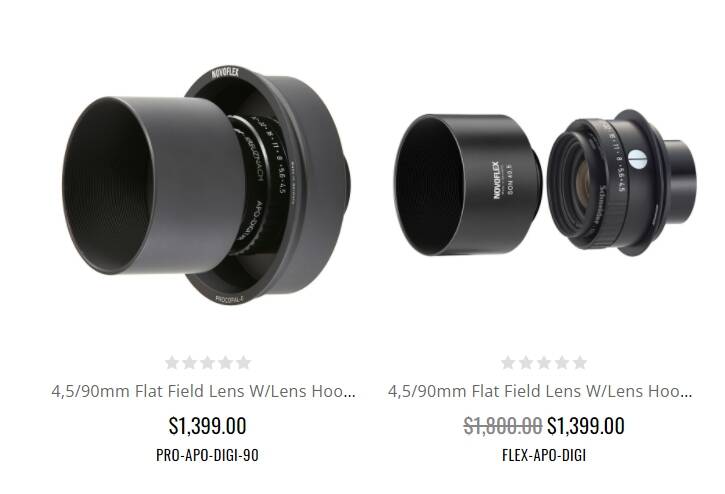 Anyone know that the difference is between these 2 lenses? How are they for camera scanning with bellows?

Companies are terrible about answering emails. You wonder what the people do there all day…fondle their phones?

I don’t know either lens. Check into who is selling them to make sure they are reputable and accept returns in case you aren’t satisfied with the products. Most important with lenses. They should also be able to send you the spec sheets for the lenses, and those spec sheets should have the MTF charts which will tall you in a jiffy what to expect and what is different between them.

That would be great Mark, except Novaflex Germany / USA never answers their emails. Really sad Mark about the state of communication nowadays with some of these companies.

I’m also thinking of trying some APO Schneider or Rodagon lenses from eBay. Not returnable, but can be resold with affordable losses. (I hope.) China has them cheap. But knockoffs?

Daniel, Novoflex in the US is represented by Mac Group at 75 Virginia Road, White Plains, NY 10603. You should be able to phone them at 914 347 3309 and discuss your requirements with them. However, at this link Contact Us | Novoflex, Novoflex claims they answer emails quickly. Don’t forget that on account of COVID a lot of company communication has been messed-up, so you may be a victim of this.

Oh and one more thing: be very careful who you buy lenses from on eBay. There are some real operators.

I am not sure why would you consider such a lens for scanning at all? This is not a macro lens. It may not be worth the money if used beyond recommended magnification ratio. Such lenses make sense if they can be bought under $100. If you can afford more - buy specialized macro lens with full integration with your camera. You also do not mention which film sizes you are going to scan which makes all the difference.

OK, thanks Mark and Vlad. As far as macro? I don’t know. It is what the company recommends. That was why I was asking for feedback as to value for $$.

This thread is quite old, but I though it may still be useful to reply here

The lenses are the same, just different mounts. The Pro version is fixed mounted into Novoflex’s bellow adapter, so you cannot remove it (I own that one too) while the Flex version requires the screw mount plate to be attached to the bellow system.

The SK APO 90mm lens is great, while not specifically made for 1:1 repro, it still performs well on that scale (stopped down to f/7.1 - f/8). Though I’d advice to purchase a different lens from the Schneider series with better results and at a lower price (used), if you plan to use it for film scanning only. Look out for the Schneider Kreuznach Makro Symmar 120mm f/5.6 – It’s available optimised for different magnifactions. Depending on which camera sensor size you use (APS-C, FF, Medium Format) you may want to go for the 0059 (1:1.33) or 0058 (1:1) version.

SK offers the lenses in both consumer and industrial versions. The industrial one is widely available on the used market for prices ~ $400-$500. The difference from consumer to industrial are missing aperture clicks on the latter and also the aperture is numbered 1-6 instead of the aperture value.

A small warning here though: 120mm for film scanning @ f/5.6 gives a thin depth of field, so you need to make sure your film is really flat for best results.

If you wish to use a less painful DoF, look out for the Rodenstock APO Rodagon 75mm 2x f/4.5. I strongly advice to go for the 2x version here, as the 1x version covers only up to 6x6 MF negatives while the 2x version has a super huge image circle and performs better in magnifications other than 1:1.

I own all lenses mentioned here (and also the Novoflex BALPRO bellow system), so can speak from experience – In case that matters

Both the SK120 and R75 have a M39 mount, so they can easily be used with Novoflex’s bellow system and the L39 mount plate (both in reverse and normal mount).

Happy to answer questions, if any.

Folks - you want to be careful about buying Schneider lenses. Customer service ranges from non-existent to abysmal.