Firstly I also posted this on the DSLR scanning facebook page, so apologies to users who are on both and seeing an identical post… I’ve been trying to get a DSLR scanning set up working for months now, and I’m nearly giving up.

In short, my film holder creating a vignette. I have spent countless hours fiddling with different set ups, lenses, LEDs, distances between light/diff/film plane, and am at a loss.

From this testing I know that my macro lens has 0.1ev fall off in the corners. I should be able to create a lens profile to correct that vignette.
I also know that my brightest LED with the best color accuracy has some fall off at its edges. It is consistent in its luminosity to light 35mm film evenly, however. Careful placement should cover that.

So my big issue is that my film holder, which comes from an old enlarger, is casting a shadow.

I have tried masking the light coming into it, both masking directly over the diffuser, and masking closer to the film holder itself. It doesn’t seem to have any effect.

I have uploaded a couple of screen caps, one with the film holder in place and one without it (otherwise the shots are identical) showing the severity of the fall off. This is taken a distance back with my most even lens. I have also uploaded a couple of pics of my film holder. These samples are without any film in there, it just demonstrates the way light is behaving.

Does anyone have any ideas? Is this an inevitable issue with LEDs? And if so, how come many others are doing fine with LEDs? 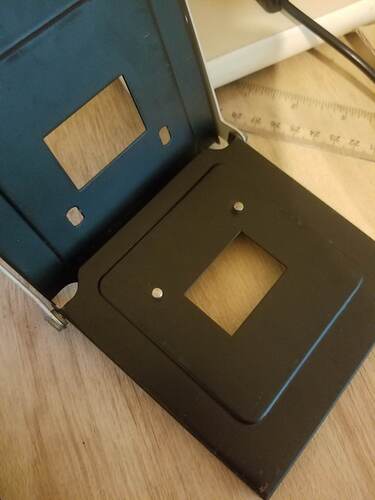 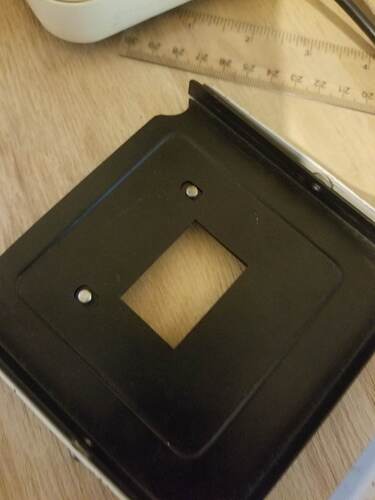 Sorry, didn’t mean to delete my post but here we go again…

Would you be able to upload a photo of your setup as a whole showing the LED light source, the diffuser(s), the negative carrier and the camera? I don’t understand what those dark splodges are at the corners, surely they should be masked off? Is it an LED bulb shining up through a diffuser or is it a panel?

The source in this one is an Aputure AL-MX, the splotches are the corner of the light. Yes they should be masked out, but it’s not actually affecting the evenness of the luminosity in the centre of the the panel, where the film negative would be. I have removed masking, light exclusion etc features while trying to figure out where this issue is coming from.

Thanks, I’d never seen that one before, it is pretty small, and presumably very bright. I think it would benefit from being built into an enclosure with some extra perspex/plexiglass diffusion above it. I don’t really see that the carrier itself can be having an effect here. For now the enclosure could be just a suitably sized cardboard box with a diffuser on top but I think the light unit would benefit from masking down a bit for this application. Failing this I’m liking the Cinestill CS-Lite which has been designed as a light source for slide scanning, I’m getting around 1/200 sec at f8 on ISO 200.

Yeah, it’s got reportedly good color accuracy (found an old post by someone testing different panels for color performance while scanning, and it did better than other popular models - and I happened to own it already). I also own an older, larger panel which isn’t as bright, and needs more distance from the negative carrier as the LEDs are less dense.

I have its diffuser spaced above it (tested various distances, and found that about halfway between lens end and light gives the most even diffusion).

I have downloaded your jpeg comparison shot but I’m not really seeing this effect from the negative holder that you are seeing so I hope someone else can help.

I’m only looking at a jpeg so perhaps some information has been lost. If I look at this jpeg in Lightroom with the highlight warning on and raise the exposure then when clipping starts at around 2.5 stops over exposure the pattern of this clipping on each side seems broadly similar. You can however see that the construction of the panel does mean that the missing LEDs at the corners, and the posts holding it together, do have an effect on the evenness of distribution. The fact that the panel is quite small at 94mm x 58mm means that the unaffected area is smaller still so you are dealing with quite small tolerances and the panel presumably needs to be fairly close to the slide. As a comparison the illuminated area of the CS-Lite is 149mm x 94mm and evenly illuminated so there is more area to play with and I use mine about 3 inches below the slide. This isn’t meant to be an advert for the CS-Lite but most panels recommended for slide scanning are in fact larger than this I think.