What is better: Stitching or using a high megapixel camera?

I am trying to figure out the best way to scan my 6x6 negatives.
Currently I use a Nikon D610 (24 mpx) with a AF Micro 60mm 2.8 D lens. I am super happy with the sharpness, especially when I scan 35mm film that fills up almost the entire sensor.

Now with 6x6 I encounter the problem that a big part of the 24 mpx sensor will be unused and it will leave me with ~12 mpx files (which is fine for digital usage).

If I want to get higher resolving files, I have two options:
1. Stitching two or more photos. I use the LR Panorama mode for that.
2. Buying a 50 mpx camera.

I tried stitching a lot of times, but when the film borders are out of focus due to curved film, the resulting image will have a soft areas in the middle of the frame after stitching (see image below). Also sometimes the 6x6 images are not entirely square after stitching.

so my question: Do you think using the 45 mpx sensor of the Nikon D850 and doing a single scan of the negative will give a good compromise with great sharpness? I think the endresult would give me like roughly 24 megapixels, and I wouldn’t have to stitch. What is your take on this? 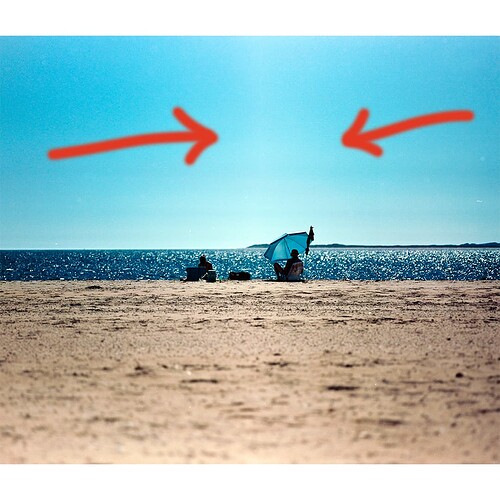 Hi, I’m trying to figure out the best possible combination of camera and lens for scanning my 4x5/6x7 negs with the caveat being my budget, which is up to 1000(1200 max) euros. I thought I had it narrowed down to Sony A7 mk 1 , but I just read about the shutter shock so I guess it is a no-go. Resolution is important as I have plans to print big and i don’t mind doing multiple shots and stitching. That being said I guess I will need extension tubes? Bonus one:) Do you have some recommendation…

I’m using the Essential Film Holder which does a great job keeping the film flat, but with MF it is still not perfect. What’s the general consensus here? Especially the last frame of a roll, if it’s too close to the edge, end ups curved because the film holder doesn’t have enough to hold on to.

Maybe ask Andrew Clifforth himself, the edge/end frames are certainly a problem for any holder design that doesn’t use at least one piece of ANR glass. Is there any scope for taping the loose edge?

Do you have any opinion on the essential question of this thread? Like would you rather stitch or scan with a higher pixel density?

would you rather stitch or scan with a higher pixel density?

It all depends on what your output goal is. Capturing a 6x6 will always waste a lot of pixels of any full frame sensor. If you’d use a camera with a MF or 3/4 sensor, that loss can be reduced.

I have been stitching shots of 645 format negatives and found that it a) works well in Lightroom and with optimal scanning setups and lens correction (e.g. DxO PhotoLab) and that b) I don’t need it in general.

Well, if the only reason you would be buying a D850 would be to scan 6x6 in one shot then I’d be inclined to stitch, it’s easy on 6x6, just 2 shots. Your D610 could in theory give you 16MP but of course there will be a border that reduces this, but not down to 12MP I would have thought. Stitched it will give you a maximum of 36MP, but again reduced by whatever margin you leave. The D850 would give maximum of 30MP in a single shot. Still need to fix that softness though, even if it’s only towards the edge.

I do a lot of work with Lightroom’s PhotoMerge (either HDR or Panorama Stitching or both) and I find it usually works very well. The higher resolution cameras is useful for providing more resolution for 35mm frames in a single shot, but when it comes to larger media or media with a different aspect ratio, stitiching is the way to go for gathering more megapixels. Whether using this approach or not, the best way of assuring flatness of field is to make sure the camera to media alignment is accurate (perfectly parallel) and that you use an anti-newton glass to hold the negative onto the light table. I have written all this up on PhotoPXL.com.