Any one know why this happens and how to avoid it? Other photos in properly exposed environments look great. But whenever i have something underexposed it freaks out. 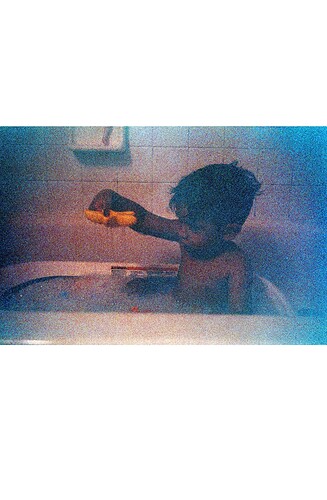 Hey – Welcome to the forum!

This looks like a case of not finding the right balance in the photo.

Before you convert, try to add a little bit of the border back into the image and set border crop to 0%, so NLP has a clear blackpoint to work with. This should give you way better results.

In the context of what you describe and how it looks to me - this is a very thin negative because you under-exposed it at the stage when you made the photograph, not when you imported it to NLP. If so, what’s happening - simply - is that more of the film’s dye-clouds (so-called “grain”) is showing through than would be the case if there were more developed image content. There isn’t much you can do about this, because the extent of grain mitigation required to make it look much better would create significant unsharpness. So it’s a trade-off.

What cvanderbroek says above I would recommend recasting a bit as follows: first scan or photograph the negative with a bit of the film border area showing. When you open the negative in Lightroom, before you open NLP, click the eyedropper on that blank film border. This will set the neutral black point. Next, crop out the empty border area so that it can no longer influence the tonal range of the conversion from negative to positive (this will conform to how NLP is designed to work). THEN finally, open NLP and convert the photo. For normal exposures this procedure will give you close to a usable result, however, I find that in all cases it remains necessary to make some edits to the converted positive, using the tools available in NLP first, then for localized or other kinds of edits that NLP cannot handle, do those in LR, remembering that once in LR, the luminance and colour controls work in reverse.

What size is the film? Small film area = more grain.

What speed was the film (ASA/ISO)? Fast film = more grain.

Was the film severely out of date when processed? Latent images fade over time, and film is fogged by heat, light, and all higher frequency radiation (UV, X-Rays, gamma rays, cosmic rays),

Were old negatives stored improperly in acidic paper envelopes in an attic or basement, or in a heavily polluted atmosphere? This can cause different dye layers to fade unevenly in different places on the film.

If using the Essential Film Holder, is your EFH loosely assembled? If so, your light source may be leaking around the edges of the film slightly.

Are you using the latest version of the EFH design? It reduces light leaks around the edges of the film and holds film flatter.

Are you copying film in a DARK or DIMLY LIT environment? If any light is shining on film that is even slightly curved, you will get colored flare.

You may be able to solve SOME of these issues by changing your setup. If dye fade is involved, though, short of major surgery in Photoshop, not much can be done. SOME improvement can be had by adjusting sliders in Lightroom Classic. Start with Texture, Clarity, Dehaze, Saturation, and the Noise Reduction and Sharpness tools.