Dont know what to call it other than above. Kind of a squarish pattern on the scans. Using the latest version of vuescan. Windows 10. Scanner works perfectly other than this output. I have owned one before and this is not typical. 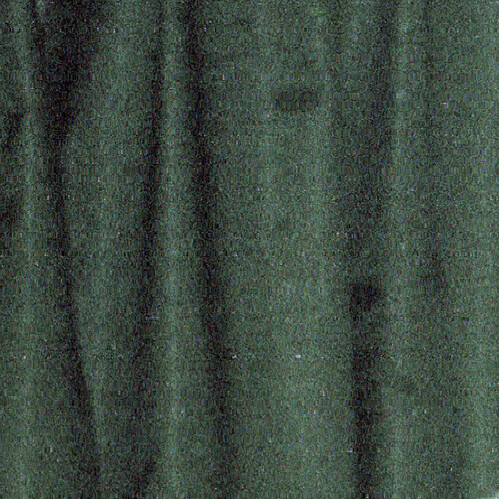 Your sample is 714 x 714 pixels, is this a straight crop out of your (roughly) 8100 x 5400 pixel scan? Is this weird aberration over the entire frame? Clutching at straws rather but have you tried a different USB cable?

Yes, straight crop.
The entire scan has this block look.
Contacted Vuescan and they said it looks like a hardware problem.

Contacted Vuescan and they said it looks like a hardware problem

I’ve got a feeling they are right, I’ve seen vaguely similar problems reported on Imacon scanners and sometimes changing the connector cable has fixed it. It looks like the data is getting a bit mangled, could be internal of course but worth exploring other avenues. Could it even be lubrication required on the transport? I had a Microtek scanner which wouldn’t work at all but upon taking it apart I found that the grease had just dried out and I was able to fix it quite easily. I don’t know the 5400 but I do know there are quite a few pictures of the internals online with the intention of showing how to remove the lens to use in a camera scanning setup. Similarly you do also see complete scanners on sale without the lens for the same reasons but whether you could successfully transplant the lens into another body I have no idea. Hopefully it won’t come to that.

It is weird. I have never seen a scan issue like this.

I’ve had a Minolta 5400 MK1 for about 2 years and it exhibits similar artefacts if you zoom all the way in. I am pretty confident, that this is related to some sort of lash/friction in the mechanical system probably owing to wear and to the lubrification on the rails/spindels gunking up. I haven’t gotten round to servicing mine, but I would be confident, that that would solve the issue. I’ve heard, that often the motor couplings need to be replaced in Minolta scanners. Could you indicate the orientation of your blocks relativ to the film? In my scanner I see a similar effect but I come to the conclusion on the cause based on the fact that the blocks are along the length of the film(aligned with the scan direction)…

Replacing the cable is less likely to solve your issue, as Serial protocols with parity(such as USB) are less susceptible to signal degradation by bad cables than parallel protocols such as FW.

Nobody has really answered this correctly. The issue is with Vuescan. This issue only happens in vuescan and is not a hardware fault. Instead, I don’t use it. I use the original dimage scanning software. The results are way better anyway and you can then also use the ICE function on the negatives you want to look perfect (it’s slow with ICE on). I normally do linear scans with the positive film scanning setting or sometimes I do 16 bit non linear with Adobe rgb colour profile and then I don’t have to do the l tiff prep step in NLP. Of course you will need windows for this I believe. The old Dimage software still works in windows 10 & 11. I’m not sure about Apple. Anyway I never did figure out the problem with Vuescan unfortunately.

If anyone else needs help with this or wants comparisons between Vuescan and the OG dimage software, reach out, I’m happy to help.

Oh and one more edit, the OG software is amazing for getting good results straight out of software without using NLP. It’s especially good with damaged negatives, faded negatives, and negatives with extreme colour cast. They have corrections built in for all those issues. I also use it when I have issues with NLP’s conversion colours.

It was a hardware problem. I returned it and bought another 5400 which is working fine.

Strange that I can get perfect scans using Dimage scan if it’s a hardware problem yet blocky scans exactly like you had with vuescan. Either way my info is helpful to anyone who has this scanner.