Hi everyone, I have a doubt, I use a Sony A7RII mirrorless camera with a Micro Nikkor 55 f2.8 Ais for scanning, all mounted on a stand for IFF reproduction, I’m thinking of using a novoflex rail for focusing mini castel that I had purchased for digital macro photography, and here the doubt, how should the MAF be done? Should we position the focus with the objective or with the rail?
Thanks

The distance between the lens and your camera sensor determines the magnification and for a particular format you’d expect this not to change so it is better to move the camera and lens on the rail rather than adjust the focus on the lens, you’ll also tend to see that it will snap in and out of focus better. On the other hand changing the focus on the Micro-Nikkor may allow finer adjustments more easily so whatever works for you is another option.

I use a double-rail Novoflex bellows with an enlarger lens and with that it is certainly better to leave the distance between the lens and camera untouched and move the bottom rail instead. In fact the adjustment on that type of rail is quite coarse though, I think one revolution of the adjustment knob is about 12mm on the rail. The rails with a lead screw are much better, like this one from Nisi, there one revolution of the lead screw is only 1.25mm on the rail, less likely to creep on a vertical setup as well.

Thanks @Harry ah ok, also with my sled I noticed that I focus worse than using the focus on the lens, that’s why I tend not to use the novoflex, I have this model (image) 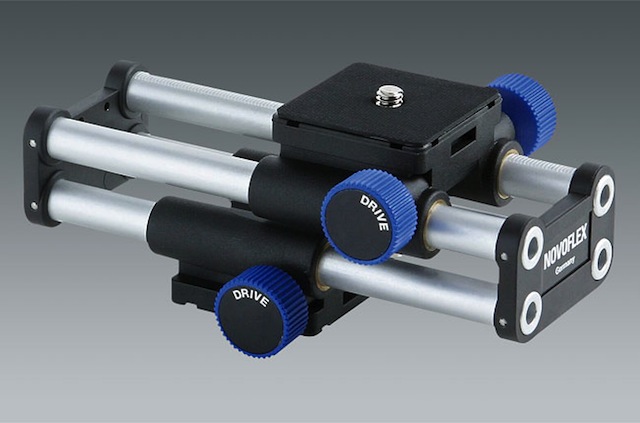 Yes, mine is an older version but exactly the same function and quality. They are really well made but the gearing is maybe a little coarse for slide copying, the difference between sharp focus and slightly off is extremely fine at 1:1 especially with high MP cameras and pixel-peeping - mind you it is perfectly possible, fine gearing just makes it slightly easier. Of course the 180mm travel of those Nisi lead screw rails is mostly wasted provided you have another means of getting the camera close to the correct distance. I’ve actually adapted a Manfrotto adapter so that I can raise it up and down a few millimeters with a 5mm screw which has a 0.8mm pitch but I happened to have one knocking around anyway. High end users go for those electronically controlled macro rails, very nice too.