I’m curious, does NLP while doing conversion, is trying to average a photo to mid-gray as camera does? For example, if I have a foggy scene of the sea horizon and the pale boat in the distance, basically the whole photo is bright. Then, I have another photo of the dark rocks on the beach. Will NLP darken the first one and brighten the second one automatically while converting?

My DSLR is set to manual, so it does the same exposure for every frame, but I got one shot darker than I think it should be, so I’m wondering, did I messed up the exposure while shooting film, or NLP is trying to darken it because the scene is too bright.

I shot bracketed exposures and found that NLP is fairly tolerant to where the histogram is, as long as it is not piled up against either sides. Here’s an example of a shot spanning 2 EV and the respective conversions. 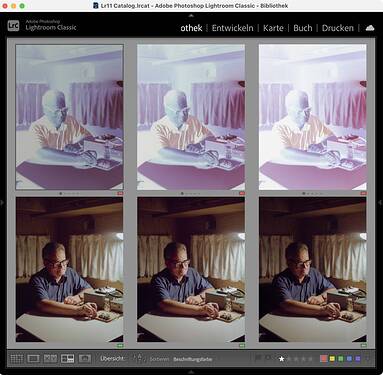 When you expose a piece of film, you expose such that the scene’s tonal range fits the film’s tonal range. When you then digitally scan that film, the film itself becomes the ‘scene’ and the same rules apply with the caveat that a correct digital exposure is usually somewhat brighter than one for film.

NLP isn’t trying to lighten or darken anything. It simply converts (and inverts) the RAW camera data into RGB values which we see as pixels. So, if you are using a standardised manual exposure for every frame and one shot comes out darker than it should, it probably means that frame was underexposed at the time of exposing the film.

Happy to be corrected if I am wrong on this.

Yeah, that was exactly my question. I hope it simply converts what’s on the film, and not trying to be smart and compensate for my over or underexposure of the film. I would rather do it manually if I don’t like the immediate result.

Of course. The “immediate result” for me at least is rarely what I would like - that’s why we have software like NLP, Lightroom, Photoshop, etc, to manipulate the data into a state that we find pleasing.

I do basic adjustment in NLP. If I like the photo, I spend more time in NLP and Lightroom editing it, and if I really like it and I want to print it, I take it to the Photoshop.

Inkjet printing at the moment only. Darkroom is my ultimate goal, but I’m not there yet.